The two stories in Part One of this blog actually happened with a mom and her three children. In the morning the children went to day care at the university where their mom was taking a morning class. When they left the house in the morning the sun was shining, the sky was blue and they were intending to go to the beach for a swim in the afternoon. Most days this worked well. Some days it didn’t because it rained in the afternoon.

For most children, seeing the rain would inform them that they would not be able to go to the beach. The understanding that the beach is closed and that swimming doesn’t occur when it is raining is part of the hidden curriculum – the unspoken social information that neuromajority brains automatically pick up. For individuals with autistic neurology the brain does not always support this automatic understanding of hidden curriculum. Instead, it must be directly taught. When a person is a visual thinker it is no problem at all to simply add raindrops to the picture in their head and consequently see one’s self swimming at the beach in the rain! Thinking in layers allows for the underlying explanation to be made visual, and thus, in an autistic neurologically friendly way to receive and understand the information.

When this mom announced, “We can’t go to the beach because it is raining,” two of her children, though they were unhappy, understood the situation automatically even though nobody had ever told them that people don’t usually go swimming when it is raining or that swimming pools and beaches close when it rains. The third child, having autistic neurology that did not support the synthesis of new information (It is raining) along with the social understanding the beach closes when it rains, reacted to this change of plans. He promptly started screaming, sobbing and was unable to be consoled as he thrashed about in his car seat all the way home while his brothers implicitly understood that even though they would rather go to the beach, they would need to play indoors that afternoon.

I have made and used the two stories  from Part One of this blog series and have found them helpful to show autistics of all ages the way the system of thinking in layers works. Some need no further instruction. Once they see the system they can start thinking that way. Most need more practice with the system by using clear overheads to draw out the layers of their visual thinking.

The way I work with this is to first get the story from my client by drawing stick figures and using words. I like to do this using sticky notes. Many of my clients are not able to tell their stories in chronological order. Using sticky notes allows for rearranging the time line of events as needed. Once the sticky note story is in order the drawing it out on overhead projector sheets is easily accomplished.

For some the ability to transfer the visual system of thinking in layers to their own internal thoughts happens automatically during the process of working with the external visuals. For others, more explicit support is needed to get the system internalized. With these clients I sometimes prompt each step of the way saying, “Can you see this layer in your head?” or, if needing to be more direct, “Put this layer in your head. Tell me when it is there.” Others don’t need the explicit step by step prompts, but instead I will talk about how this system can work both on the outside by drawing on the overhead projector sheets and on the inside by visually thinking of and stacking up the layers.

Clients have reported a variety of ways this has coalesced for them. For example, one client reported that whenever she felt like everything changed she immediately “layered it up.” This meant the entire visual picture in her head was layered simply by her thinking to layer it up. This allowed her to go through each layer looking for the one layer that had changed. Rather than throwing out her entire picture, she removed the one element, inserting the one new element of change.

Changing a Picture or Replacing a Layered Picture

After some practice I came up with an effective protocol to use with clients for changing a picture. This has worked well with clients of all ages and across settings. Below are the steps to the protocol with the example of the Going to the Beach story (introduced in Part One of this blog series) that is in the mind of the autistic and then, when it is actually time to go to the beach it is raining outdoors, meaning that going to the beach will no longer be able to happen that afternoon.

Changing or Replacing a Picture Protocol

“Tell me our plans” followed by

“What else is in your picture?”

(Example: In this case the little boy had not added anything to the original story. It is important to find out because if building a sandcastle had been added to the story then it can be included going forward when repeating the Going to the Beach story.)

4. Tell the story of the current picture.

Include the important parts

(Example: If building a sandcastle had been added to the original story it is now important and needs to be added in the telling of the story. If no additions occurred then you would tell the original Going to the Beach story.)

Include the changed parts

(Example: If the child had added stopping at the treat hut for a slushy on the way from the beach to the car then this changed item would be added into the original Going to the Beach story. If no changes have been made then the original story stands.)

You will tell this story so that you are both sharing the same story. Once that is the case you will move along to the next step.

5. Accommodate the unexpected event with a transition story.

You will want to ascertain this story of the unexpected event is in place. You can tell part of the story and prompt the child, “Tell me what’s next.” Repeating this in a rote manner several times is helpful. Once he knows the whole story you can take turns telling it.

Example: In this case “the beach is closed” is the salient line. Simply saying that you are not going to the beach would likely not be concrete enough. Tie in a concrete feature of the unexpected event. 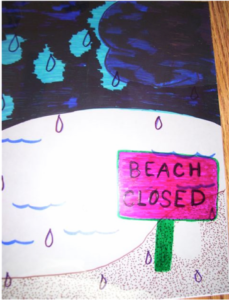 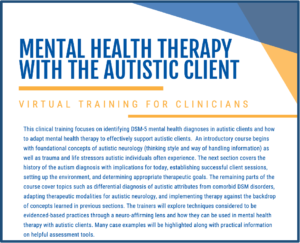