The neurology of a person with autism does not automatically organize the world outside their skin. When we are able to organize the happenings in the world we usually do so differently than neuro majority people.

As a young child I saw over and over how light from the sun interacted with water particles rising from the ground and with water droplets in the air. This repeated experience became useful over time in that I learned the predictability of this occurrence. I also learned the effects of various factors (such as clouds, rain, air temperature, wind, etc.) had on impacting the interaction of sun brightness with air and ground moisture.

By the time I was old enough for kindergarten I had an extensive experiential knowledge of sun sparkles and thus could put myself into the picture of the sunlight in various circumstances. Because I had figured out the predictability and pattern I was able to attain mastery over the situation that once took me by surprise, causing unfavorable behavior reactions! With this newly found mastery I was able to become part of the world around me, as literally seen in these paintings that now include the little girl of me. (Paintings are at www.judyendow.com Please see Morning-Chirp Sun Girl, Night-Song Sun Girl and Cloud-Breath Sun Girl.) 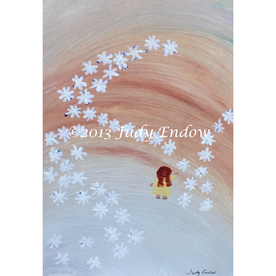 Painting is Moon Sparkle Spring
available in packs of 5 greeting cards
and 3 print sizes
under the Art Store tab at
www.judyendow.com

It was wonderful to have learned so many kinds of order to the world around me – an order I learned as I learned the pattern of sun sparkles and moon sparkles across the seasons.

I had many opportunities to gain mastery over the blinding sun sparkles due to the fact that children growing up in the 1950’s played outdoors for many hours a day. Every day I interacted with what I saw by repeatedly trying to catch the sparkles and tails my eyes could see all around me. Looking back, I am so glad I grew up then and not now because back then children had much more opportunity for imaginative play.

If I was a little girl growing up today and displayed the repetitive behaviors of catching sun sparkles and world tails it would likely be referred to as stimming and adults around me might try to stop the behavior. If that had happened I may never have sorted out the world by learning and using the various predictable patterns of atmospheric interaction between the elements of light and water. The behavioral stims of repeatedly trying to catch the sparkles and tails I could see, but were not seen by others, helped organize the world around me.

This was important because as an autistic I thrived on predictability, sameness and routine. I organized my world in an unusual way using predictable atmospheric interactions of light and water.

Often time behaviors that don’t work well in the world develop in response to the autistic perception of confusion, chaos and change. This is not intentional, planned or defiant behavior, but instead an unplanned reactive behavior.

Most of the time stims are helpful and allow us to participate in life. For me, it helps to organize the world outside my skin because while stimming I am able to unravel the everyday ordinary barrage of sensory and social information that becomes overwhelming. I am so glad nobody stopped my stims when I was a little girl. It was simply thought of as playing outside when in reality I was busy at organizing the world – finding the predictability, pattern and routine outside my skin.

Originally written for and published by Ollibean on March 6, 2016.
To leave a comment at the end of this blog on the Ollibean site click here.

1 thought on “The Predictability, Pattern and Routine of Stimming”