When I was a teenager, the “too much” of life caught up with me. Everything in the world around me was just too much.

…too much noise with the varying sounds of the world clamoring to grab my attention, their pitches and tones wildly crashing into each other as if competing for a speed prize on a race track – or so I wished … If only the cacophony of the world outside my skin would at least line up and compete in some orderly fashion – like race cars on a race track – it would then allow me to watch the color of each sound going around and around, and thus enable me to keep track of this forever multi-tonal, warped schizophrenic sound in the world all around me –

polluting the air waves       with

The above is how the first chapter of my book Paper Words: Discovering and Living With My Autism opens. This book was published in 2009. All my growing up and most of my adult life I was blamed for being too sensitive and was treated for what people assumed were psychological problems. In fact, I spent some years of my childhood in a state mental institution. Despite the various treatments I received my problems never improved. Behavior Modification taught me which behaviors to inhibit because they were unacceptable to those around me. I learned to hide the pain reaction to my sensory sensitivities, getting better at it with practice, and ultimately gaining discharge from the institution.

Over the course of my adult life I continued to figure out my own sensory differences and got better and better at regulating my sensory system. Today I am well able to live a comfortable life, but it requires everyday diligence in monitoring and adjusting input to my sensory system. Sensory regulation has been my ticket to being and doing all I want in this world.

Even though I personally know how dramatically autistic sensory differences can impact one’s life, I still occasionally find in my consulting practice professional people who say things like “Sensory isn’t really a real thing so we only give students sensory breaks on Fridays because we have more time on Fridays” and “I don’t believe in sensory. Not sure I believe in autism either.”

You can now understand why I am so excited about new brain research findings reported in March 2015 on the sensory problems many with autism spectrum diagnosis experience. It finally brings scientific authentication to the everyday lives of countless autistics, me being one of them!

The new research reports that signals that relay sensations from nerves into the brain are abnormally strong in people with autism. The findings, published March 12, 2015 in Brain, explain why some people with autism are overly sensitive to sensory stimuli such as light, sound and touch (Khan, 2015).

Then, this past week Nicholette Zeiiadt wrote about this research in an article called “Brain Connections Give Clues to Sensory Problems in Autism.” Here is an excerpt from this article (Zeliadt, 2015):

The new study found that autism brains have abnormal connections both among nearby regions and among those that are distantly connected.

The researchers discovered that, in particular, long-range ‘feed-forward’ connections, which ferry signals from peripheral nerves into the brain, tend to send abnormally strong signals in people with autism. By contrast, short-range ‘feedback’ connections that relay signals in the opposite direction within the brain tend to be unusually weak.

“Essentially, this gives us a finer-grain understanding of what might be going wrong in autism,” says lead researcher Tal Kenet, instructor in neurology at Harvard Medical School.

The finding “really pushes the field forward,” says Marlene Behrmann, professor of psychology at Carnegie Mellon University in Pittsburgh, who was not involved in the work. “It opens up a new window into this question of connectivity in autism.”

I love when science catches up to the autistic experience. It allows countless people to receive validation overnight. We go from “psychologically disturbed” and “behaviorally challenged” to “scientific” all because science has caught up with our everyday experience of the world around us. We are not there yet today, but hopefully in a soon-to-be tomorrow a child presenting similar to my experience in outlined in the opening section of this blog will be treated differently. I like to think that instead of years of institutionalization, tomorrow’s autistic child will instead be treated by an Occupational Therapist for the very real sensory issues dictated by his autistic brain. Indeed that IS happening in some places today, but sadly, it is not yet the collective experience in the autism community.

Even so, I am encouraged that young autistics coming up behind me might be treated and regarded more humanely than I was for most of my life. Because the collective experience of countless adult autistics is often counted as invalid by society at large, the validation of the humanity of autistic people can come from brain research.

So, my heartfelt thanks goes out to all those who spend their life researching the brains of autistic people. Your-day-to day work in a scientifically technical field validates autistic humanity to society. Nothing could be more important. 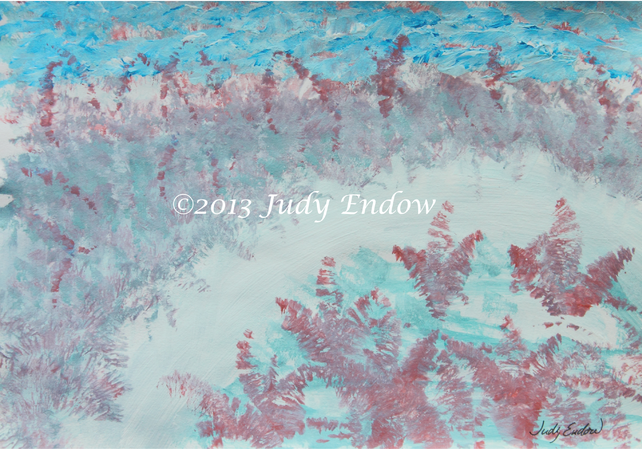 Painting is AIRSCAPE
available in packs of 5 greeting cards
and 3 print sizes
under the Art Store tab at
www.judyendow.com

Originally written for and published by Ollibean on May 4, 2015