Seattle Children’s Hospital had to pull an ad from the King County Metro busses on Friday July 7, 2013 due to complaints about the words “Let’s wipe out cancer, diabetes and autism in his lifetime” next to the face of a smiling youngster.

An online complaint campaign was organized by the Autistic Self Advocacy Network’s Washington chapter (ASAN-WA) to object to the ad’s assumption that autism was an illness to be wiped out like cancer and diabetes.

“Autism is a disability, but it is not a disease. It is not a life-threatening illness,” said Matt Young, co-leader of ASAN-WA. “The idea it’s a state to be wiped out has much negative impact on our lives.”

A Facebook post by Beth Ann Vosskuhler-Waleski echoes sentiments of many.  Beth Ann wrote, “Autistic people such as myself do not need a cure, instead, we need people to accept us for what we are and to celebrate our gifts as well as they would celebrate anyone’s.”

On Monday, Katharine Fitzgerald, director of marketing and health promotion at Seattle Children’s said: “It’s been difficult because we do so much to support children, teens, and families affected by autism here at Seattle Children’s, and we’re doing amazing research at our research institute.”

The hospital has an Autism Center, providing treatment and support for individuals with autism spectrum disorders. The bus ad was one of three created as part of a $70,000 campaign to raise awareness for Seattle Children’s Research Institute.

Kudos to Seattle Children’s Hospital because after receiving a high volume of phone calls, emails and Facebook comments they pulled the metro bus ads and posted this official statement on its Facebook page, “We are sorry for the hurt and anger these ads have caused — that was never their intent.”

The offensive ads are expected to be replaced with a new version sometime during the next few weeks. 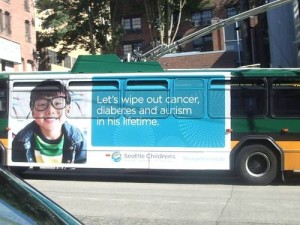