In Part One of this blog series the reader was introduced to the autistic friendly method of creating pictures in layers.  Visual examples were given. Each layer of the story is created on see through overhead projector sheets. This allows the elements of the story to be stacked up to make one picture. The story elements looked like this: 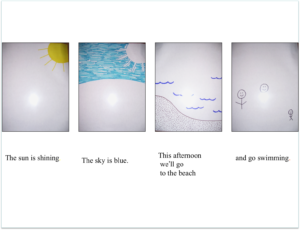 Stacked together the elements of THE STORY create one picture that looks like this: 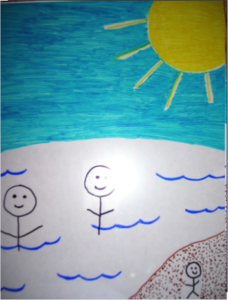 In Part Two of this blog series our story continued.  It rained and going to the beach was no longer possible, continuing with layered overheads stacked on top of this original story, the UNEXPECTED EVENT story looked like this:

Notice in the third overhead of the above picture of our layered transition story the swimmers left the beach. This is one great reason for the layered pictures! It allows one element of a picture to change without needing to destroy the entire picture. That feeling of “everything changed” is prevented. This often prevents meltdowns.

And then, when the neurology is ready, the new plans can be introduced such as the story from Part One of this blog series called Playing Indoors. 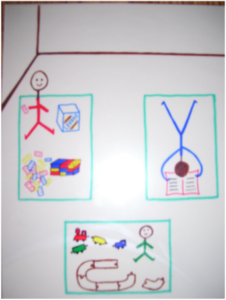 Please see Part One and Part Two of this blog series for further discussion of everything mentioned in this blog so far. AND know that any event can be mapped out is similar story fashion than the stories presented. Here is the protocol in words rather than in pictures for those readers who would like them!  The protocol  is  in  the  top  two  horizontal  rows  of  this  chart. The  third  horizontal  row  gives  examples/hints  for  implementation.  The  last  horizontal  row  tracks  the  story  examples  used  in  this  blog  series. 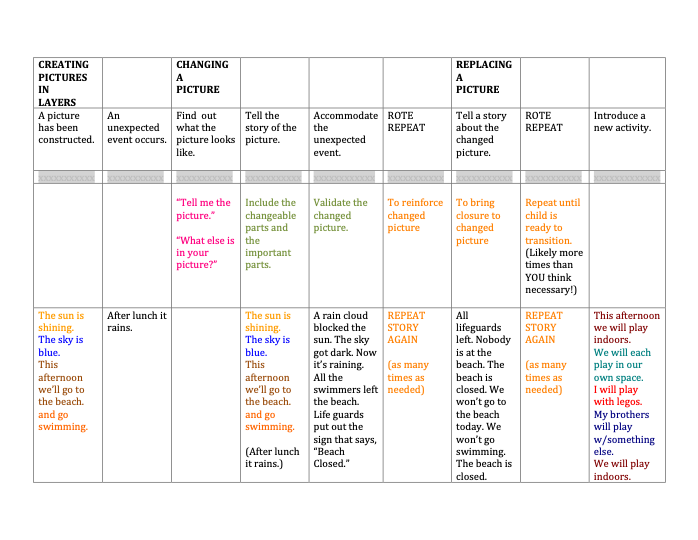 Often times when people see this protocol they feel it will take too long. For those who have used it they are surprised that even though it does take some time, it is often considerably less time than the time the child spends in a meltdown and then recovering from the meltdown. Additionally, it is much easier to talk this through (or draw it out for those needing the visual support or for those needing decreased auditory input in the moment) than it is to deal with a meltdown.