Ever since the not guilty verdict in the George Zimmerman trial and more recently, after a police officer shot and killed Michael Brown, I have been and continue to be very much afraid in the pit of my stomach. The not guilty verdict for George Zimmerman and the dragging on of the no fault attitude in Michael Brown’s shooting for months with a resulting “no charges to be filed” in regards to the police officer who shot and killed him underlines the fact that in our society it is perfectly ok to track down, shoot and kill someone perceived to be acting different.

The majority is considered the norm and they hold the privilege and power. This can be in regards to race, ethnicity, sexual orientation, gender and neurology or almost any area where you can find a dividing line among people.

I am autistic and have known all my life that my neurology is considered to be “wrong” by the majority. It is easy to know this by simply looking at almost any of the therapies out there for autism where the measure of success is in terms of how neurotypical an autistic person can come to look.

I think this measure is a wrong measure and I believe it to be a huge betrayal of autistics. Today I have the new understanding that even though it is fundamentally wrong to make autistics act as if they are who they are not…well, it also may be life-saving if they should meet up with the George Zimmerman’s of the world. In fact, even having a chance encounter with a police officer could mean an autistic gets to live only if able to act neurotypical.

Many autistics look and act different because they have a different neurology. Some of us have spent a great deal of time and effort to learn to look in a way that allows us to fit in so that we might have more opportunities in this world. But even on our best days we can become easily overwhelmed as our body betrays us when sensory input, emotions and movement do not automatically regulate and serve us well.

We have learned to cope. Some of us wear hoodies and noise cancelation devices to cut down on sensory input. This makes us look different. People become afraid of us because they assume we are up to no good.

Some of us regulate by stimming. This can include, pacing, muttering a phrase repeatedly, hand flapping, rocking or a variety of other repetitive movements or phrases. This makes us look different. People back away from us because they are afraid.

Many of us do not look people in the eye because it is painful or overwhelming to us. Some of us do not have reliable use of spoken words when we are under stress and others of us never use spoken words. It is assumed we are shifty, sneaky and not to be trusted. Others become afraid of us.

I have been told that I am one of the lucky ones – lucky because I have an awareness of how I am perceived as different and scary when I am overwhelmed. Many autistics do not have this awareness. There are others who are aware, but do not have the ability to inhibit their natural autistic self for several hours of the day.

The stakes are high. They always have been. An autistic under stress can look scary to the general public. I feel so bad when other people are afraid of me only because of how I look different. But now I know that the stakes are even higher than I thought.

You see, it doesn’t matter the bazillion of times I or other autistics act correctly in the eyes of society, but the one time we are not able to inhibit our own self is the time we could be killed for who we are – a human being with an autism neurology. If another person is carrying a gun and thinks we are up to no good or is afraid of us he is allowed to shoot us.

I feel horrible for even having to think this way, let alone write about it – and yet, it has become the society we live in. I have known all my life that I am different. People do not understand autism. People fear what they don’t understand. George Zimmerman’s jury came back with a “not guilty” verdict. Trayvon Martin, Michael Brown and all the others shot because they were Black will not come back to life. Being perceived as different got them shot and killed.

Today I know that society believes it is ok for anyone who is afraid of my difference to follow after me, shoot and kill me. This is why I am much afraid in the pit of my stomach. 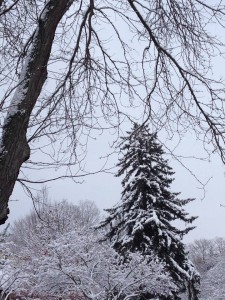 Originally written for and published by Ollibean on October 12, 2014